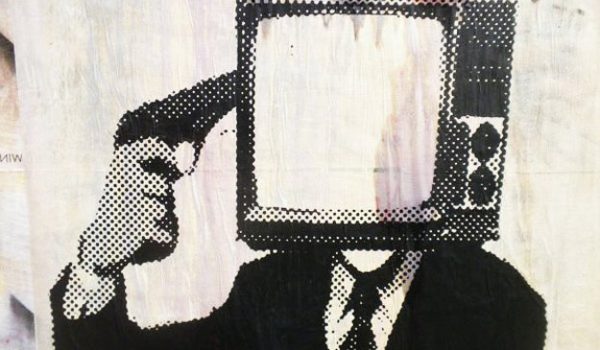 So that was it, the first battle for television had been won, VCR came and went and the world once again sat before their humble TV set eager to watch every episode of FRIENDS and ER. They shared some laughs. We all did, but what was happening behind closed doors was no laughing matter…

Little did I know that three little words would drive such a wedge between TV and it’s loyal viewers… “World. Wide. Web”.

It started off slow at first (with an irritating as hell dial up tone). Viewers would take to their computers upon arriving home from work, they would turn on the TV… but keep one eye on the PC.

On the whole this wasn’t much of a problem, viewers still gathered around their sets at the right time and planned their weeks TV schedule with their paper back TV guides. But I still remember that PC… looking at me, from the corner of the room, staring at me with menace in it’s upgraded graphics card.

Then the changes quickened, by the time the millennium bug came and went (here’s hoping it fixed all of my problems) the Internet was in full swing, and once again, the whole notion of Event TV was in ruin.

What I found most amazing was Internet TV seemed to be just as much at war with itself as with anyone else. I have never had more wires plugged into me; a device for this, a box for that, they even tried to get ME online!

The introduction of AOLTV and WebTV (now MSNTV) allowed viewers to watch TV, read Email, chat to one another and surf online… all on my screen!

Can you imagine… having someone you love look at you, but they’re seeing someone else…