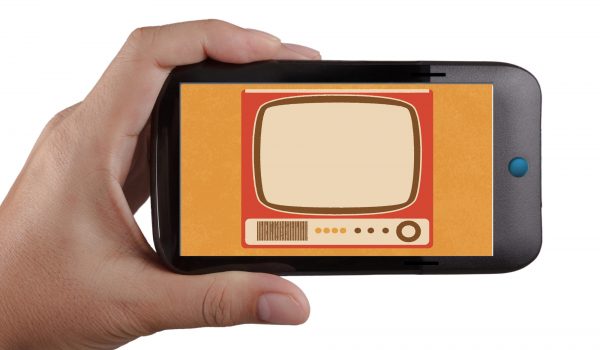 More and more people were following this method of TV viewing.

TV sales fell and portable devices rose like a devastating mushroom cloud. I watched helplessly as so many of my friends were discarded in favour of new, smaller, often portable screens.

I’ll never forget the night they took Sanyo… With her perfect thin body and full HD complexion… it wasn’t enough to discard her like an old PlayStation, but they had to destroy her first… I’ve never seen such glass-shed.

I swear they enjoyed it!

I didn’t think it could get any worse, sure, viewers were watching TV in other rooms, over the Internet, but at least we were on in the background… (somewhere the radios from 1940’s were laughing at me).

But now, they’re not even in the same house! They’re… MOBILE

On trains, buses, in queues, at work, in coffee shops and bars.

We’re not anywhere, we’re RIGHT HERE, at home, in the dark corner of your living room! Look at me!

On average Humans pick up their smartphones 100 times a day, and they are consuming more and more TV content through these phones every year.

And it wasn’t enough that portable devices took viewers attention away from the TV, but now they had to mock us, by actually controlling us.

Smartphones began replacing actual TV remote controls. It was like having a limb cut of and being viciously beaten with it into submission.

Event TV was dead. TV as a device was becoming endangered.  All hope, it seemed, was finally lost…

See you next time, for the gripping final chapter of our story.