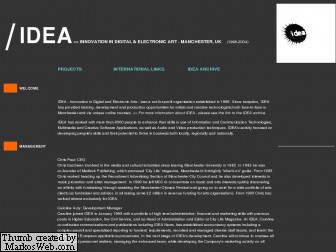 So, what were we doing back in 1997? I was working at IDEA (Innovation in Digital and Electronic Arts) running digital art projects and training peeps in digital video.

IDEA ran a project to make a CD-Rom based on a live art project ’36MC’ (thirty six hours in a mystery chair) – the CD was called ‘MCCD’. It wasn’t the best CD-Rom in the world, but it opened the doors…

IDEA had done a deal with Poptel around this point and had got legions of people online for free/on the cheap. For me although the web was fascinating in its vastness it didn’t hold much in terms of content. I was interested in media and stories. The web seemed to be ugly, slow and full of dungeons and dragons.

MCCD did see the light of day and was published by IDEA. It sold very few but as we had previously made another collaborative CD-Rom called ‘Televestite’ which never saw the light of day, this was an improvement of sorts.

One of the great things about working on MCCD was hooking up with Ivor Perry – ex guitarist from Easterhouse who was also in the Smiths for a short spell. Ivor was an inspiration and a crazy genius to boot – he came from music, loved culture (books, films, games) and had recently done a masters in computer programming. It was a really creative time as we began mixing up digital media with computer code and networks.

It felt like there was something different starting to happen…